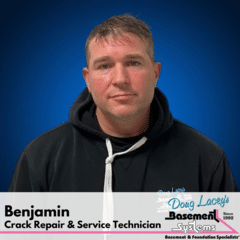 Ben's extensive knowledge/experience with basement waterproofing and repair makes him a valuable member of our team here at Doug Lacey's Basement Systems. As an essential part of our Service Team, he has worked directly with hundreds of homeowners to ensure they receive the best solutions available to address their concerns.

Being a Service Technician and Crack Repair Specialist, Ben especially enjoys the opportunity of meeting new people and being able to help said people.

In his spare time Ben enjoys spending time with his family.

Customer Reviews
About Me
View all Reviews

Cracks in Basement Foundation Repaired in...

Crack in Foundation Repaired Before Finishing...

Before and after photos from jobs I've worked on:
Back to Previous Page Back to Meet The Team