One of our Service Technicians went out to a home in Medicine Hat, AB to check up on the sump pump to see how it was doing, clean and flood test it and see if it needed any repairs done.

Once the Service Technician arrived at the home he opened the sump lid and immediately noticed mucky water and knew something was wrong. The technician put his safety gloves on and grabbed the pump out of the sump basin and he found that the pump had been filled with iron ochre; and it needed to be switched out immediately with a new pump. The float switch would not even move as it was stuck because of the iron ochre.

What is iron ochre?

"It ranges in colour from yellow to deep orange or brown. It is also the name of the colours produced by this pigment, especially a light brownish-yellow. A variant of ochre containing a large amount of hematite, or dehydrated iron oxide, has a reddish tint known as "red ochre" Source-Wikipedia

When iron ochre is growing in pipes, it attaches to the sides, forming in layers of reddish sludge or slime. It will build up on the ends of faucets, on the screens of laundry machines, and on the insides of pumps, tanks, and plumbing.

If the bacteria is allowed to build up thickly enough, it will also corrode the pipes and plumbing equipment; including stainless steel surfaces, which are used by the bacteria as a source of iron.

As the bacteria builds up in thick layers, large chunks of it will begin to break off, potentially clogging the system. In the right conditions, iron bacteria can grow quickly, and has been known to clog an entire well system in just a few months.

Our Service Technician replaced the pump with a new one and flushed the system of any other build up that was present in the pipes/basin. He also recommended that they get their service done twice a year to make sure this much build up does not happen again.

Now this homeowner understands the importance of having us out to service the sump pump system! 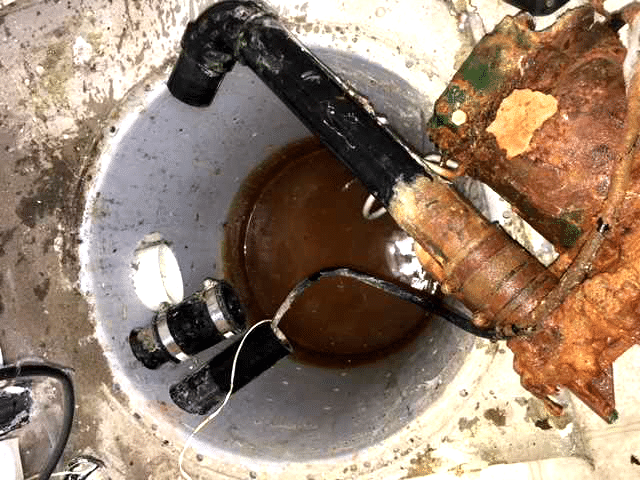 This is the pump that had to be replaced, there was no way of cleaning off all of that Iron Ochre build up. The basin was also flushed and cleaned at the time of the service.

Back to Previous Page
Back to Case Studies